On Saturday the 16th May I found myself able to disengage from the usual domestic responsibilities and slipped away mid afternoon in glorious sunshine  for an assault on Briarty Hill (VK3/VC-029).  Traffic on the drive to the Sunnyside Rd turnoff about 2.5 km east of Seville via Wandin North on the B380 was light and the weather was close to perfect in autumn.   The sealed road took me north through a verdant valley of houses on large blocks and a few small farms.  After about 4km Killara Rd. forks off to the right.  Ignoring VK3ZPF’s instructions and also his map I sailed past, keeping the mountain on my right, thinking I was heading in the right direction.  Killara Rd, however, turns west and after a few kilometers I was heading away from the hills and in open plains.  I pulled over, checked the instructions, and retraced my path to Yarraloch Way, getting to the start of the fire track.  The gate was closed.

My approximate reading of the map suggested the summit was about 2.5km away, which included a steep ‘goat track’ section.  Not being able to go any further on wheels, and looking at the sinking sun, I decided to bail out and come back another day, rather than have a rushed activation and a walk down the goat track in the dark. 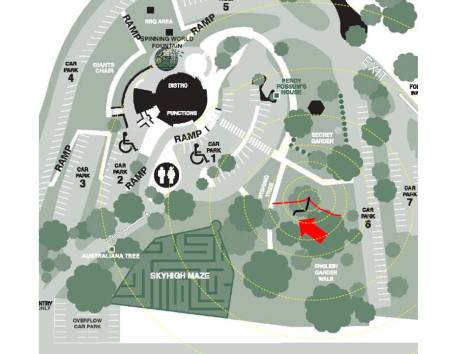 The fallback plan was Mt Dandenong, just 20 minutes away.  As I am still very much a newbie to this SOTA game, I decided that a restaurant in the dark on a Saturday night wasn’t too bad an option.  Arriving at the gate, an officer took $5 from me and asked me to park in the lower car park, as the others were full.  A wedding reception was in full swing inside the circular building where one normally shelters from the winds or buys ice creams.  I surveyed the site for potential operating positions, admiring the spectacular views of Melbourne soon after twilight, and settled on the gardens behind the reception area to the east, which offered mature trees and a number of outdoor tables and chairs.  Androzic showed 627m, just 3m below the published summit.

The 40m dipole was strung over a 5 to 6 meter branch of a beautiful moss-covered birch and the MST400 fired up on one of the nearby benches.  It was just after 7pm and 40m had the usual mix of a few locals, near-Asian babble and weak but discernable US west coast sigals.  It was much quieter than I had expected, given the amount of RF and collective ERP that emanates from the summit.  Fine reception indeed.

I was only a few hundred meters from one of the famous TV towers. Conditions were dry, still and cool but not cold, and enough light from the reception center filtered into the gardens so that I could see roughly around the table.  Nine QSOs followed, over about 40 minutes, including two VK6s and a VK4 returning 5×5 reports, after which the band conditions seemed to change, and local stations disappeared.

I was aware of people from the wedding reception moving between the party and nearby car parks, and wondered what they might think I was doing if they saw me hovering with glowing electronics in the garden after dark.  At one point the dark figure of a man appeared, about 30 meters away, standing with his legs apart and facing me directly.  He looked menacing as I sat dead still, waiting for him to challenge me or pull out a huge security guard’s torch.  In fact he was more interested in another object in his hand.  The distant sound of a trickle of liquid hitting the garden bed gave away his mission.  Once emptied, he turned and walked slowly back across the car park,  presumably destined once more  for the bar inside.  It never ceases to intrigue me why some men prefer to use a garden bed rather than use perfectly good facilities  inside.   It must be some territorial primal instinct.

My primitive territorial instincts to qualify VC-025 sated, I packed up and drove home, after a fun activation experience and a pleasant evening.

I attempted some phone camera shots but the battery was nearly flat and the flash would not operate, so all I got was a flash-less image of the radio display.

Next time I will make a point of bringing back some ‘Melbourne after dark’ shots.  Radio aside, the views more than justify the drive up from the suburbs after a fine day and when the coming evening will be still.