Mt Dissapointment regularly comes up on my SOTA Finder app as the 3rd closest peak to home.  I have been eyeing it off for some time and the opportunity arose on a Sunday afternoon in late June. Others have done it on the same day as Pretty Sally for a total of 6 points but I had time only for one activation.  And it would be another twilight  one at that.  The weather was overcast and not cold,  14 or 15 degrees.  There had been no rain for the entire week and I thought I would find the bush dry and the tracks walk-able. 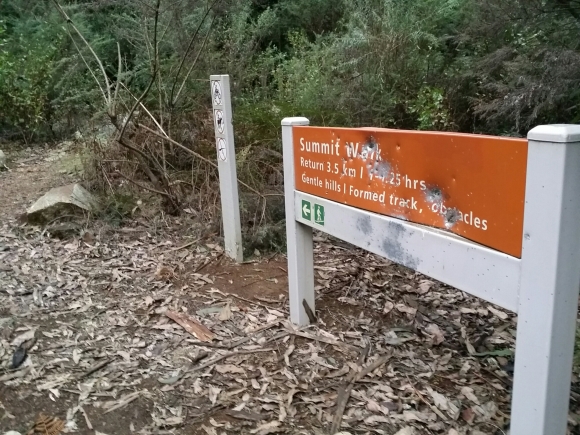 The track is well used but a bit overgrown, so there was a fair bit of ducking branches and face-swipes from branches both soft and prickly. After about 15 mins at a fair pace there is a picnic table and a historical sign commemorating the journey of Hamilton Hume and William Hovell who set out from Gunning at the western edge of known civilisation to find a route to Westernport Bay. They named this peak in 1824 when they hoped to see the coast from up top, but were, um, disappointed. Hume is forever honored with the main Melbourne to Albury Freeway. Hovell appears to have scored a road in Canberra and a suburban street in Endeavor Hills. The aspiring historian in me makes me wonder if there is a story there. 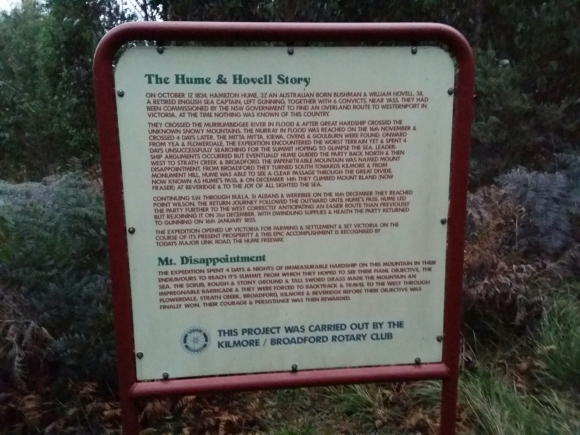 Just as Hamilton and William found, there is no view from here but you are close to the summit. The track continues and about 300 meters further on the bush clears a bit where a second picnic table is set. A very pleasant place but again no views. Right next to the table is a wide timber marker post. Androzic showed 787 meters, 9 meters below the summit, so this was the place for an activation.  Up went the squid pole with the new 40m centre-loaded vertical, 4 short radials layed out in the classic star pattern. There was not a breath of wind and the 9 meter squid pole stood motionless. 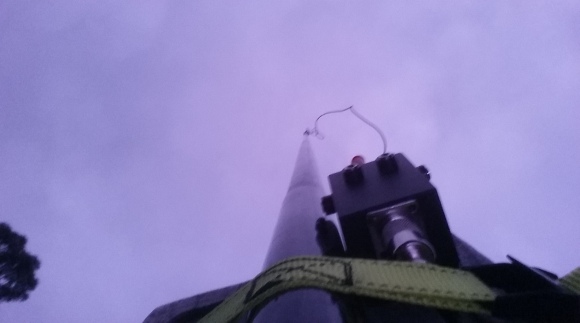 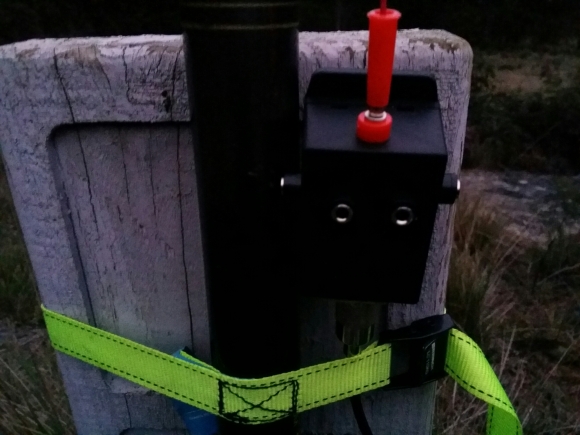 The small black box terminates the coax in 4 black banana plug sockets for the radials and one red socket for the vertical element, about 8 meters of 1mm insulated multi strand wire with about 10 turns on a PVC former about half the way up.  The loading coil is 17 turns in total with taps at 7 and 10 turns.  The 7 turns resonated at 7150 kHz, the 10 turns at 7150 although it is pleasantly broad.  It’s that simple.

It was 5.30 pm on the evening and the light was dropping, and from recent experience I knew 40 m would be dead or dying to locals but variously open interstate. It was too late for summit to summit contacts, but the 4 QSOs needed for the activation came easily, predictably from interstate. Exchanged 59s each way with Paul VK5PAS, and good reports with VK2YK and VK4NL. Peter VK3PF called and gave me 4×4 confirming that the VK3 switch in the ionosphere had been thrown… to the ‘off’ position. If I had been able to stay longer I would have tried for further reports from VK4 or VK6 given the time and my new vertical. But the light was fading so I packed up and walked out. Took a final picture of the Blair Hut sign before driving away. 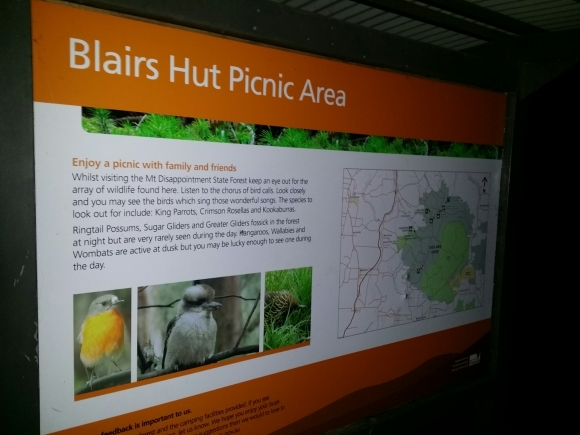 Mt Disappointment proved to be a pleasant place and activation. In fact no disappointment to be had.  The drive is easy and the walk at the end gives you a sense of having done some bush walking. On return home, I realized that Pretty Sally is quite close. In SOTA, there’s always another day and another summit.