School holidays for me involves balancing time at work with time at home.  This June-July I decided to take the First Harmonic (FH) away for a 4-day middle weekend trip to Bright in north-east Victoria, just the two of us.  FH has wanted to explore snow for some time, and I thought the combination of snow, cafes and bike trails would be a winner.  We arrived in Bright on Friday afternoon, checked into our modest but cozy accommodation, and planned our trip to Mt Buffalo for Saturday and Falls Creek for skiing on Sunday.  The next day, with hired chains in the back, we drove up to the Mt Buffalo plateau, to find not more than pockets and a dusting of snow.  The local guide in the information center had told us this was the worst snow season for 30 years.  After making a meager snow man on the oval near the Chalet, I convinced FH to climb The Hump (VK3/VE-019) with radio gear in pack. 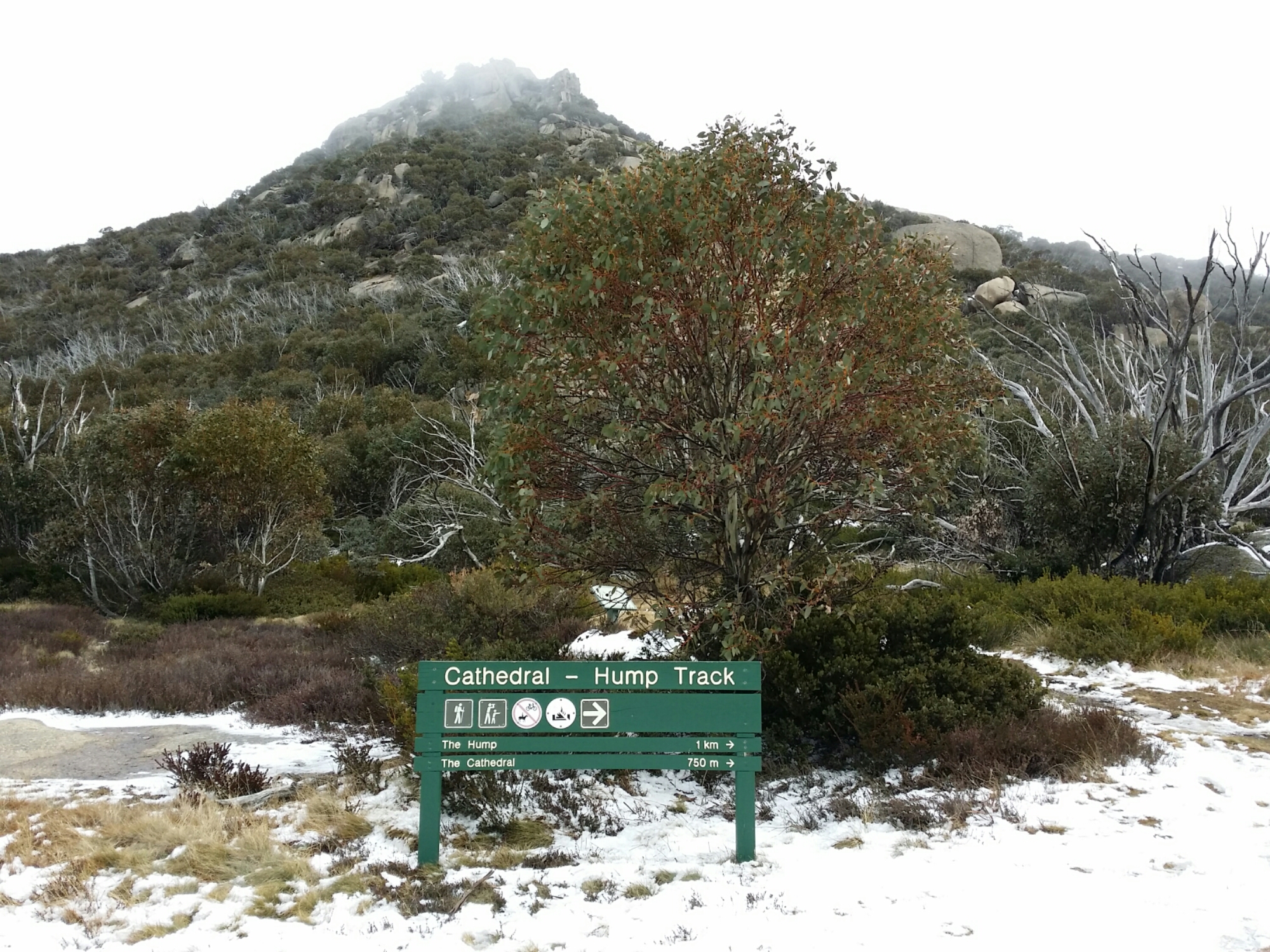 Where the ascent begins, on the main summit road near Cresta valley.

The Hump looked innocuous enough at the start of the trail.  1 km seemed insignificant.  Other activators had written about getting up there in 30 minutes.   The Hump is very accessible and a popular summit for holiday-makers and activators alike.  Here are some pictures (Marshall VK3MRG and Bernard VK2IB) of the summit in summer.  In winter it is under snow and ice and very exposed at the top.  On this Saturday in early July it turned out to be something of a winter wonder-land.  The pictures tell the next part of the story. 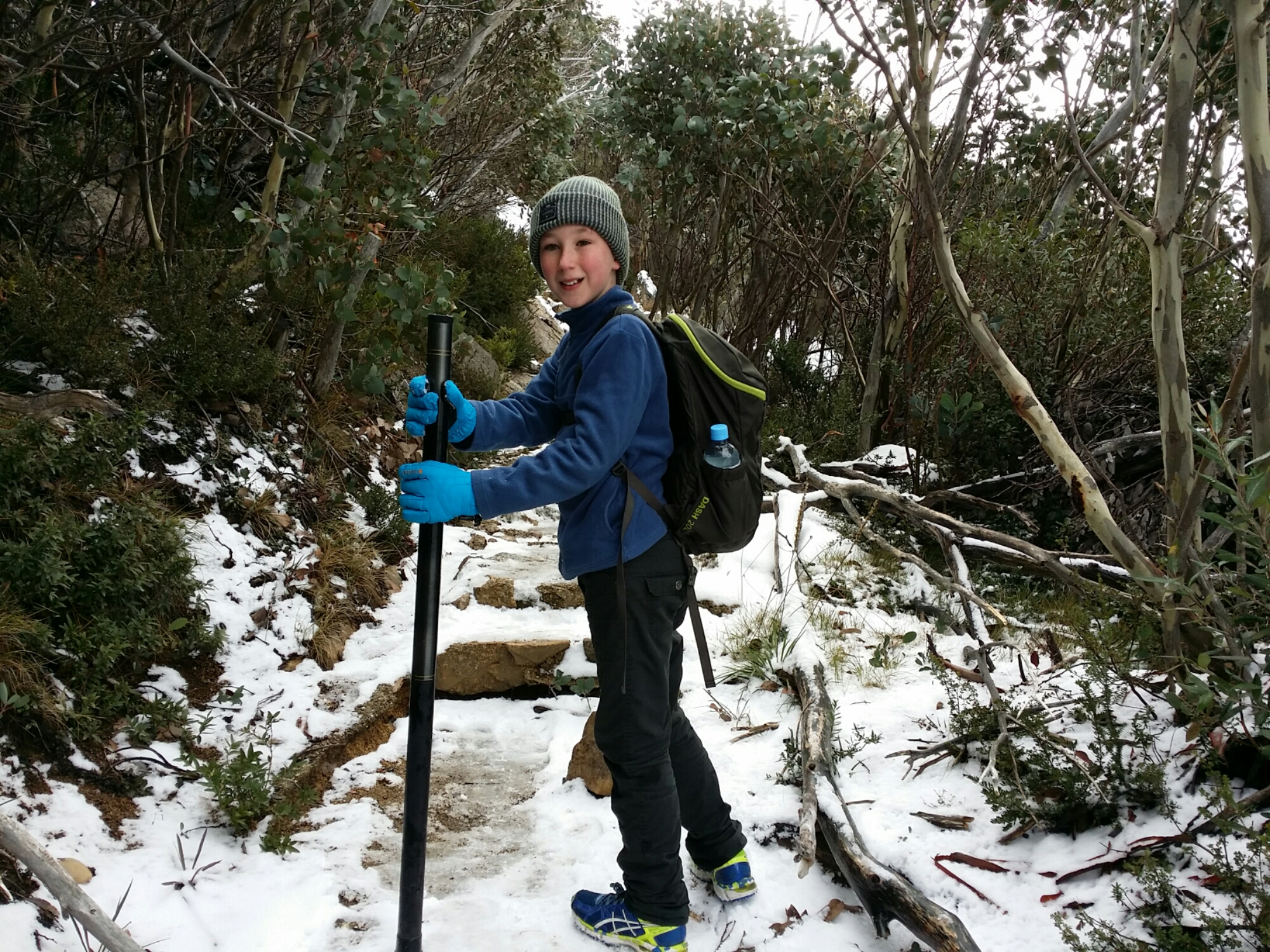 VK3HN’s First Harmonic (FH) reveling in the snow, and using my squid pole as a walking stick!

About half way up the track levels off and reveals the massive vertical rock slabs of The Cathedral. The dusting of snow made for a striking contrast.

Between snow, ice, rocks and views there are photographic opportunities everywhere in this harsh winter environment.

Ahead of us a group of what looked like tourists were chatting and calling out. We caught up with them and talked to them near the summit. They turned our to be South Koreans, working in industry in a northern Victorian town. They were under dressed for the summit but were cheerful and good company, despite not having very good English.

At the top I learned that you cannot set up a station in ski gloves. The radio, 40 meter shortened center loaded vertical took a bit longer to set up as a result. Fortunately I had bought up a thermos of hot soup and this proved to be a winner as FH devoured it, then announced he felt a lot warmer. It bought me time. If not for the soup the activation may have been cut short in the freezing conditions.

As if this maiden snow line activation was not enough of an occasion The Hump delivered one more twist. On the way down I met a climber and some family members coming up. He looked at the squid pole I was carrying and asked if I had been activating. How do you like that for an ice breaker! As I stood there slightly stunned that he knew of the arcane art of activating, I noticed he was wearing a SOTA badge on his cap. Can you believe it, crossing paths with another activator on a snow-clad summit! David VK3IL was indeed on his way to activate The Hump, a fact I would have picked up on if I had paid more attention to the SOTA Australia Yahoo group, where he had declared his intentions a few days earlier.

After a delightful chat and photos we continued down, leaving David and family to complete their climb. I emailed David subsequently and we compared notes. He had weathered the cold in his bothy bag. Several chasers asked if it had been a planned dual activation. What are the chances? 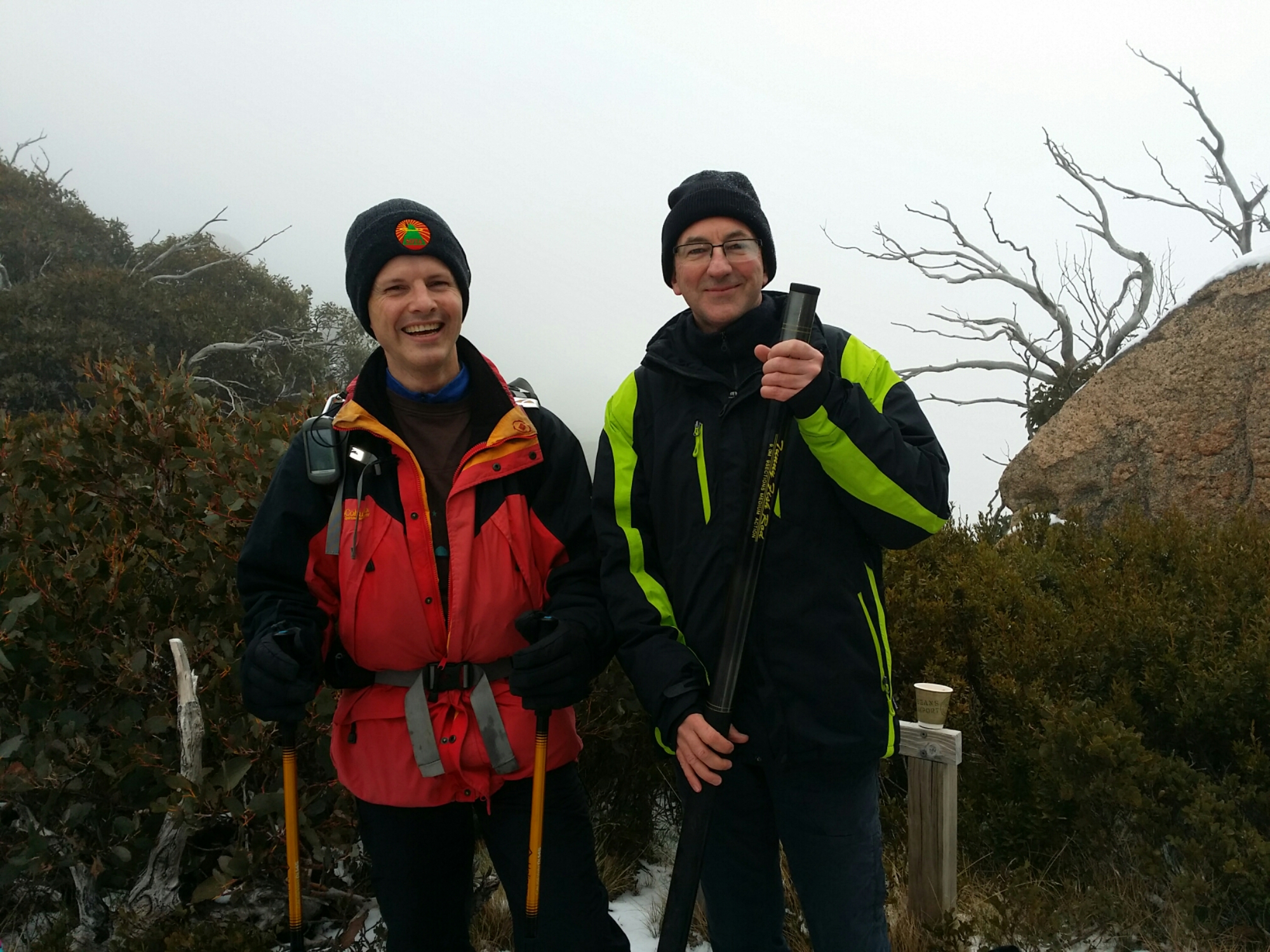 David VK3IL and yours truly VK3HN.

David VK3IL stayed in the area for the rest of the following week and clocked up a string of 10+3 point activations. David’s and my timing may have been fortuitous. A week later a massive low pressure system dumped half a meter of snow across the alpine region. Snow fell on Mt Macedon, The Grampians and as far north as the Brindabellas (VK1). This may have closed off access to The Hump and probably The Horn. I am looking forward to seeing David’s blog entry and his photos from these activations.  This was a memorable outing. Activating some of the State’s highest peaks in the snow has a special authenticity that is hard to match. And to bump into another activator, unplanned, is freakish. Come to think of it I must buy one of those SOTA beanies.