At 1490 meters Federation Range (VK3/VN-029) is the highest point in the Yarra Ranges and the only SOTA summit accessible from the Lake Mountain snow resort.  By resort I mean day visiting area for cross country skiers, tobogganists and snow-man makers.   From Marysville it is an easy drive to the resort car park, and out of season there is no park entrance fee and no traffic.

The summit approach is through the alpine area on ski trails.  Six years on from Black Saturday the eucalyptus forest is a sea of silver-grey weathered dead trees, burned and baked en masse in the inferno of that day.  Regrowth is thick in places but the predominant feeling is one of transition as the landscape regenerates, the silver-grey ghosts of the pre 2009 forest standing tall over the rampant undergrowth.  The dead upper story will be there for many years yet, perhaps decades.  I am not an ecologist but I assume the fire has created once in a century conditions for fauna and flora as the old trees are yet to fall and rot and the new forest is too young to support certain habitats needed in a balanced ecosystem.  On a different note the stark colors and textures bring out the (smartphone) photographer in you.  It is a black and white symphony.  With a touch of eucalyptus olive.

As you drive in you get good views of a communications tower on a rounded peak.  This is obviously not Federation Range which is 4 kilometers away.  When you arrive at the large sealed approach area in front of the car parks and resort, there are signs on the south side to ‘The Summit’.  This is the Lake Mountain summit.  There is a useful map here.  Lake Mountain, although being 1433 meters ASL, evidently doesn’t have sufficient prominence to qualify as a SOTA summit.  That’s a pity.  If it did we would have the perfect double… an easy summit accessible from the car park for those with less interest or ability to walk the 8 kilometer round trip to Federation Range, and the outlying summit.  Sidebar thought… I wonder if there are dual SOTA peaks elsewhere,  close enough that you can do two without moving the car, or at least not by much.  Mt Hotham (VE-006) and Mt Loch (VE-005) perhaps?   I shall leave this little puzzle for my extensive readership to ponder.

I followed Andrew VK1NAM’s excellent post on this summit, with pictures.  In fact I printed out his blog post and figuratively ticked of the signposts and trail markers along the way.  From the car park I walked north of the northern most building to the start of Royston Track.  The walk is on cross-country ski trails all the way and is evenly graded and easy walking on grassy ground.  A steady 2 km up an incline to the Crossways. Another kilometer on to Panorama loop.  Then on to Hut Trail.  Andrew’s pictures are sunnier and better than mine so use his if you are planning to activate this summit.  The last signpost holds a map that identifies the Boundary Hut, and its hilltop as the highest point in the Yarra Ranges at 1490 meters.

As I walked up I pondered the notion of a future winter activation.  Another sidebar thought… I wonder if it would be quicker, slower or about the same in July on cross-country skis?  I am not ‘self-quantified’ like some who use apps to report walking speed, climb rate, heart rate etc, but on this occasion it was trivial to work out that my walking speed up the hill must have averaged 4 kilometers per hour.  No doubt it would be a lot quicker coming back (downhill) on skis.  I note that Peter VK3ZPF averaged 8.3 km/h on his bike.

From here the remains of the Boundary Hut are a few hundred meters further on.  The walk up from the car park took about an hour.  The hut would have been a small refuge for anyone up here in bad weather.  Now it is stone walls to waist height and a partial chimney.  There is a handy trail marker pole for the activator’s squid pole and the walls make a good operating table. 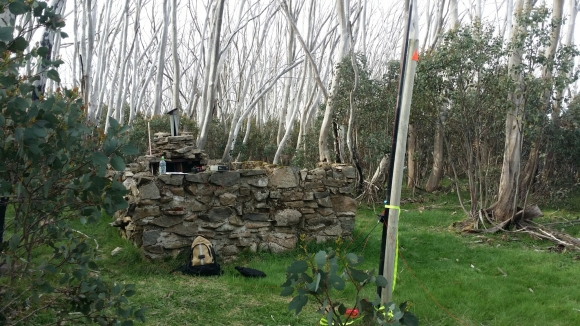 No vodafone coverage, so no spotting possible.  On air at 5pm.  The 40 meter band was packed with stations, so much so that I struggled to find any space between 7085 and 7120 to call CQ SOTA.  After 10 minutes of calling with no bites I called VK3AXH on the tail end of his QSO on 7100, just to confirm I was radiating and to get the first contact.  I doubled with VK2NEO so found myself in a 3-some.  That secured two of the four contacts needed.  I appreciated the QSO and the two contacts but soon found myself in a rag-chew discussing the weather, so politely exited and found 7090 clear.  A few CQ SOTAs there and Gerard VK2IO replied, and spotted me.  Thanks Gerard.  A handful of stations followed.  As was the case the week before from Mt Ritchie, good signal reports from VK7 and VK2 but generally poor reports from VK3.

The walk back down to the car park was uneventful and took 55 minutes.  On the way I stepped off the track to a sign-posted lookout, looking south-east over the O’Shannessy catchment area and two other SOTA summits, Keppel Ridge (VN-006) and Mt Duffy (VN-007).  Access to these summits needs some further research, planning and time.  The drive home to the eastern suburbs took a bit more than 2 hours.

All up, an enjoyable outing and activation that I will definitely repeat, either on cross-country skis or summer shoes.  And being Lake Mountain, one that you could bring family or friends to without massive social unrest. My final thought is that there seems to be no obvious connection between names and place.  Was the ridge named around the time of federation?  And where is Lake Mountain’s lake?

One thought on “Federation Range VK3/VN-029”