Mt Torbreck (VK3/VN-001) is the highest peak in a cluster of four SOTA summits in the Rubicon State Forest, south of Eildon.   I planned to leave plenty of time for it as several activator’s blogs gave me the impression that there was a climb involved.  Having another 8 point summit not far away was added incentive for climbing Torbreck in the morning. 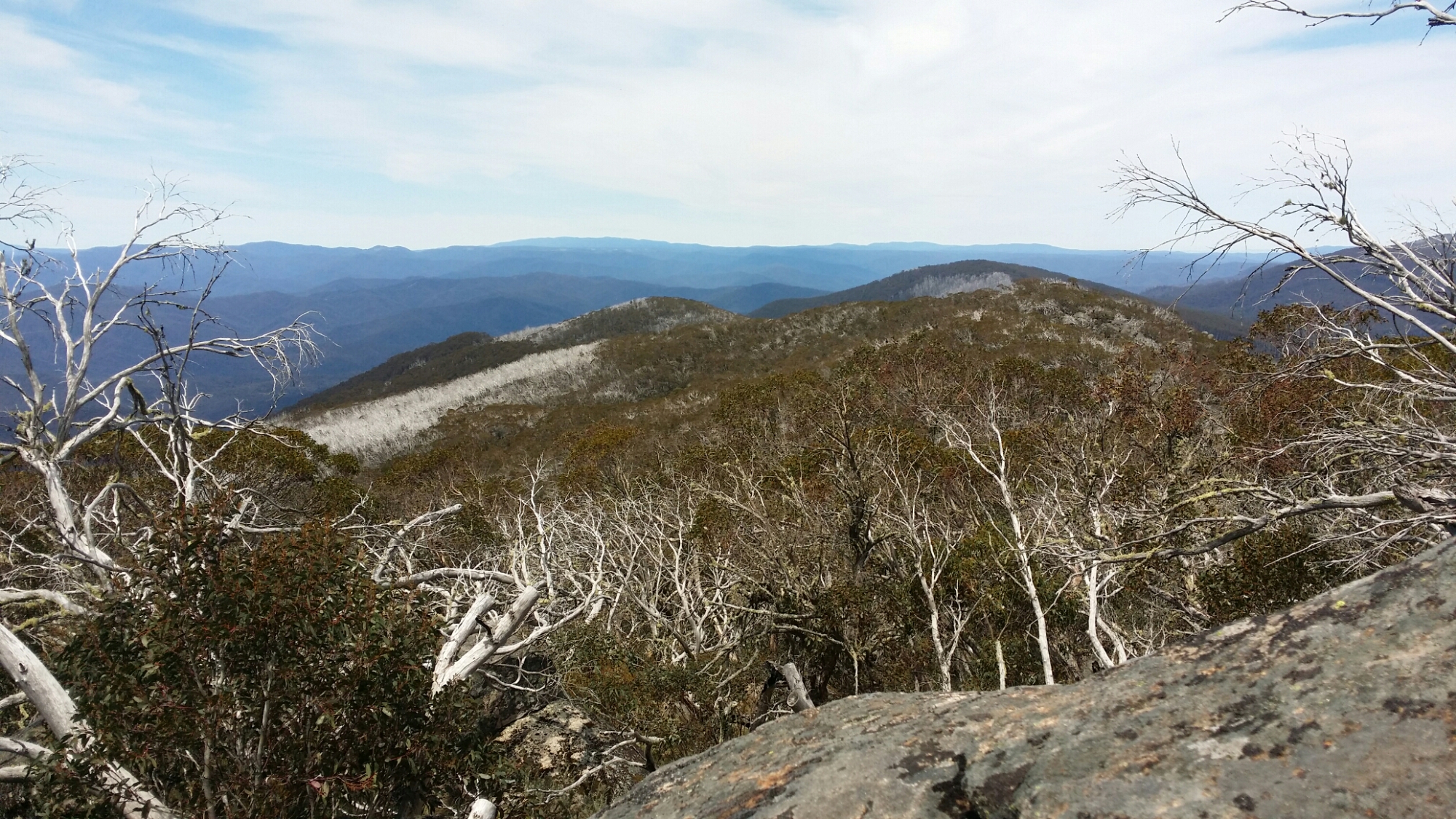 Navigation to the start of the walk turned out to be straightforward.   Drive to Healesville, then Buxton, then Taggerty, then turn right onto the Goulburn Valley Highway (B340) heading east. Then right onto Snobs Creek Rd which is sealed for a kilometer before becoming a good dirt road.  After 14 km turn left onto Conns Gap Rd.  This is a reasonable 4wd road and some 2wd drivers might attempt it but I parked about 200 meters in and walked another kilometer or so to the junction with Barnewall Plains Rd.  This is a gated 4wd only track.  Other 4wd equipped activators have bailed and walked from this point.  In fact the worst section of the 2 km of track is the first section where the gate is, so if you are in a ‘proper’ 4wd and you are happy to tackle the first 100 meters, you should find the rest of the track easy driving.

The sign says 2.1km, very steep, rough track with obstacles, and it is not wrong.   The track starts off evenly graded and increases incline the higher you go.  The last 200 meters or so is very steep but the track is well marked and if you can scramble over rocks and climb a staircase you’ll be fine.  I think of it like a vigorous gym session — if you need to ease off the work-rate you stop and let the heart rate drop a bit.  Towards the top I was sucking oxygen like Chris Judd after a Carlton defeat. Although there the similarities end I’m afraid.

At the top of the steep section you arrive at the ridge.  The track turns left and the summit and big rock cairn is about 300 to 400 meters to the north.  It’s easy walking compared to the climb.   Walking time from the car on Conns Gap Rd to the summit took me 1 hour 25 minutes.

Other activators have commented on the scale of this cairn.  It really is overly large fir its purpose.  Whoever built it put some effort in. I am not sure why this summit got a cairn the size of a small medieval Castle.  It might be something to do with air safety…

In 1940 a Royal Australian Air Force (R.A.A.F.) Avro Anson bomber crashed at Mount Torbreck while on a training flight and all four crew were killed.  A monument was erected at the crash site in 1966 at the instigation of Flight-Lieutenant Hyland, the father of one of the crew.  It was re-erected in 1996 at a more accessible location after being damaged by a falling tree.  Surrounding the monument are parts of the wreckage of the Avro-Anson.  In 2014, the track that leads to this monument was cleared by volunteers. 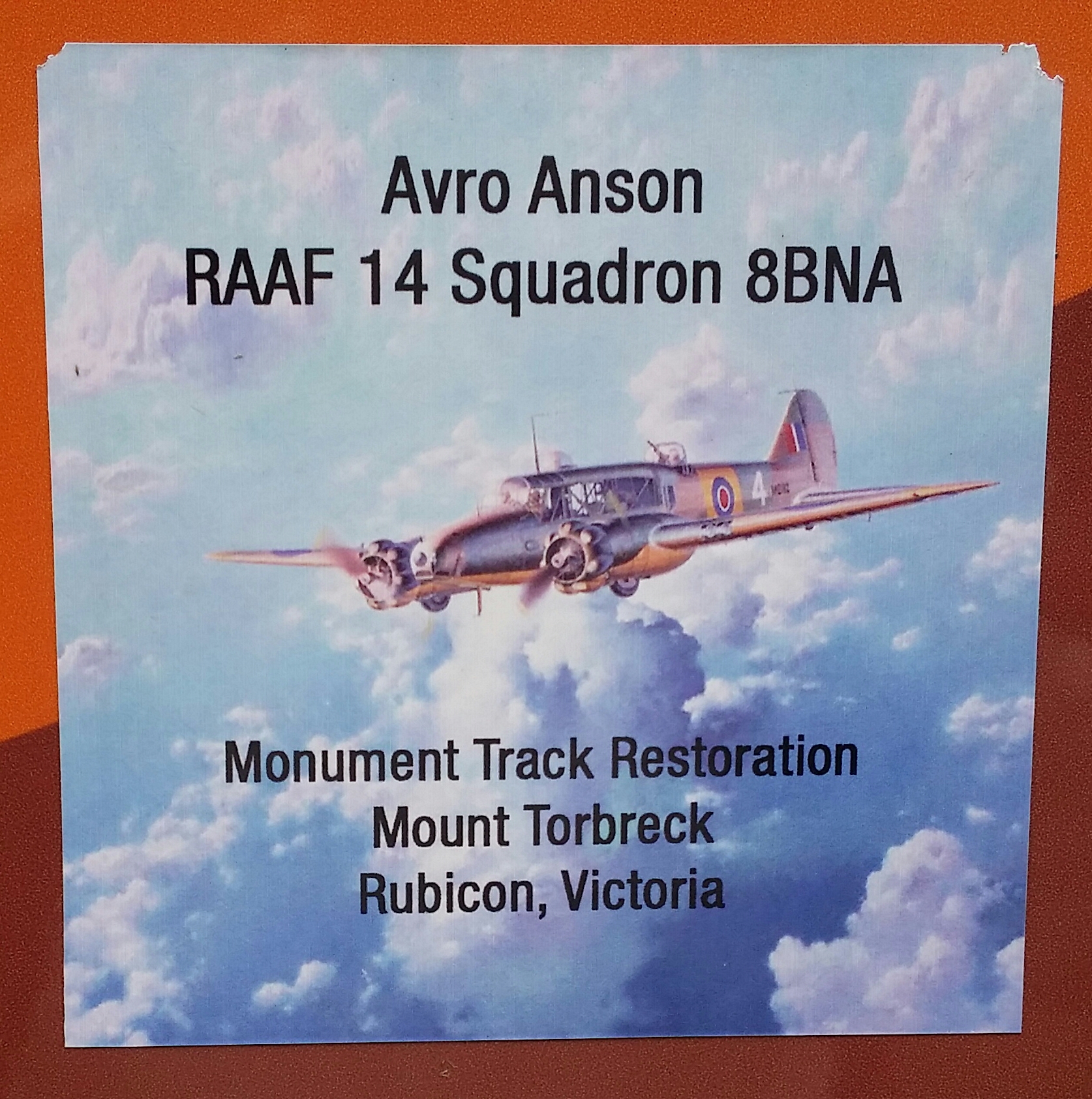 Sticker on the Barnewall Plains sign, from the monument restoration team.

The actual crash site and monument is well down from the summit just east of north.  There is a map on page 15 of this document for visitors to the memorial.  They recommend you come in from Eildon-Jamieson Rd, although you could continue on from Barnewall Plains Rd from the camping area.  This sticker was spotted on a sign at the Plains, obviously the track restoration project was a well organised effort.

Visiting this monument should only be attempted by experienced bushwalkers who are well equipped for any weather conditions and have the ability to contact emergency services to avoid becoming lost in very inhospitable terrain.

It would indeed be inhospitable in bad weather but if you visit in good weather and stay on the track from Barnewall Plains there should be no problems.

On air just after 1pm, a bad time for 40 meters, and signals were generally low.  I was able to self-spot but I suspect I wan’t being heard much.

Back at the car by 3 pm, the return walk having taken 1 hour 10 minutes (35 minutes from the summit cairn to Barnewall Plains).  I checked the notes I had made on one of the close-by SOTA summits — Pyramid Hill (VK3/VN-005).  Bill Head (VK3/VN-004) is also nearby and is accessible further south down Conns Gap Rd but as I had left the car some distance away I chose the drive-up summit.

VK3ZPF’s blog notes were most helpful in finding Pyramid Hill.  A further 2.5km south Snobs Creek Rd veers right and becomes Road 5.  Follow this for 3.8km up to the junction with Royston Range Track.  A large gate here was open so I was able to drive a couple of km further up to the second gate (also open) from where the summit logging track takes off on the right.  This is a short track that swings around the rocky summit. From any point you can turn off the left side of the track for a short bush bash of about 300 meters to the summit. Time from car to summit was 20 minutes.

Again, conditions on 40 meters were not great, and the QRN level had increased.  My spot brought out Andrew VK3BQ and Gerard VK2IO.

A good pair of summits to do in a day, first a rigorous climb, then a drive-up summit.  Two more 8 point summits (Bill Head, Mt Bullfight) are nearby.  There’s a plan for another day.