A 160 meter homebrew superhet receiver for AM

On the workbench at the moment is the receiver part of a 160 meter AM trans-receiver. So called because it will be a separate transmitter and receiver in the same box. Both designs are from Drew Diamond VK3XU’s Radio Projects Volume 4 (available to WIA members here or GQRP Club members here). I have built one of these receivers before, and it performs well as an AM receiver. The VFO is stable enough for AM and usable for SSB with the accompanying 470khz BFO. The lack of selectivity in the IF doesn’t really matter on 160m because the band is never crowded, other than you do of course hear all detected audio frequencies. Even so, the listening experience is fine for such a simple receiver.  And it sounds just like those AM receivers with barn door selectivity that I used as a young bloke. 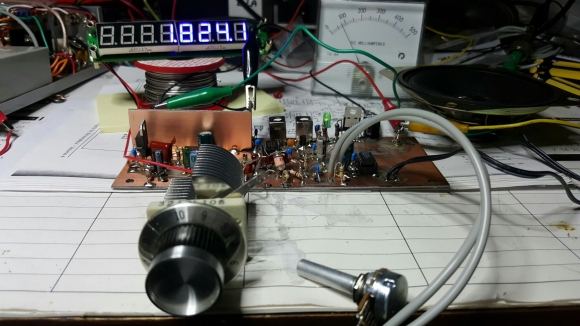 Heres the block diagram of the complete trans-receiver project. 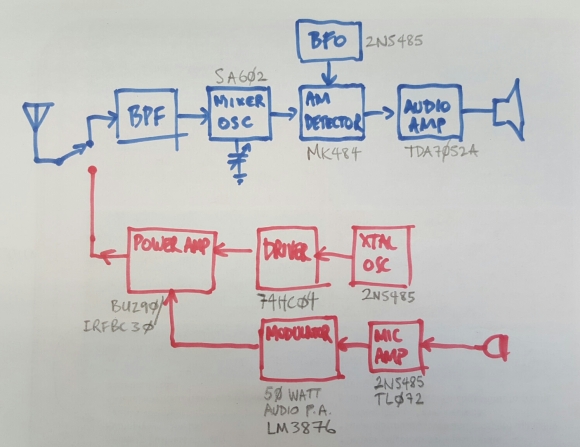 The receiver is a conventional single conversion superhet with a neat AM detector. After a bandpass filter, an SA602, with its internal oscillator provides the VFO and mixer to an IF of 470khz. Selectivity is via two AM transistor radio IF transformers (available here).  The AM detector is an MK484, the modern equivalent of Ferranti’s popular ZN414. These little 3 pin chips led to a flurry of tiny AM radios in matchboxes in their day. VK6FH seems to be continuing the tradition. In my radio it functions perfectly as an AM radio with a 160 meter converter in front.  Audio stage is a TDA7052A without any gain control applied to pin 4. 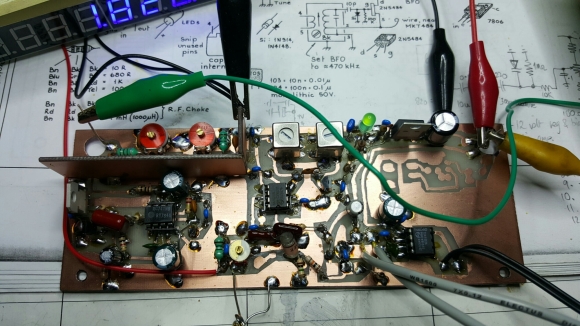 The 1.8mhz bandpass filter is top left behind a PCB shield. The SA602 is in the center, VFO components below it, IF cans above, TDA7052A audio amp bottom right. The counter at top left is a cheap Chinese piece with 470khz offset configured. The circuit at bottom left is a TL072 and 2N5485 microphone pre-amp, part of the transmitter. All components are soldered to the copper side of an etched single sided board, which is how I prefer to homebrew.

Construction was uneventful, other than when I powered up the TDA7052A it did not amplify, emitted odd noises at a point of volume control travel, and got hot!  When I wired it up I did so using a circuit image from a Google search for “TDA7052 circuit” which had the volume potentiometer’s wiper direct to pin 2.  So at one end of travel pin 2 was earthed.  I inserted a second 100nF capacitor in series between pin 2 and the potentiometer wiper to break the DC path… problem solved.  I pulled up the datasheet for the TDA7052 and was surprised to see no mention of the DC controlled gain pin.  Then it dawned on me that this feature was added in the TDA7052A.  So the tribal knowledge in this story is to always use the data sheet for the exact device you are using.  A TDA7052 is not the same as a TDA7052A!

Heres an interesting thing…. with the counter operating, the meter shows current drain at around 80mA. Disconnect the counter and it falls to around 15mA! I wouldn’t have believed it would be so miserly unless I had seen it myself! 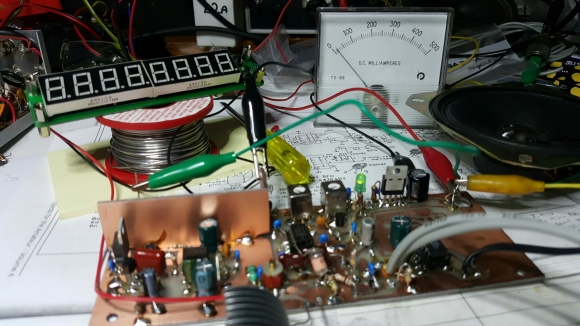 The project will continue with the mains power supply and the task of getting the transmitter working (when the mosfet arrives), then cabinetry and socketry.  Drew’s transmitter design is 30 watt AM/CW, with a crystal oscillator, a CMOS inverter buffer, and a power mosfet PA stage operating in class E with remarkable  93% efficiency, due to the fact that it is switching a square wave.  Subsequent filtering cleans it up.  The modulator is a 50 watt audio module in kit form using a LM3876 integrated circuit driving a mains transformer (as a modulation transformer) in series with the mosfet’s drain supply. Crystals on 1843khz are a few dollars.   It’s worth noting that I also found a supply of 1825khz crystals (the frequency currently used by the 160m Coffee Break net) and glass capacitors for the transmitter low-pass filter from PK’s Loop Antennas, thanks Paul!

The transmitter  board is built, but the IRFBC30 power mosfet (replacement for a BUZ90) is in transit.  The crystal oscillator and driver work fine, and were a useful signal source for testing the receiver.  I also need to build the BFO (space reserved on the receiver board center right) and replace the lovely 100pF variable capacitor with an MVAM109 varactor and associated components for trouble-free varactor tuning.

I will add some photos when the transmitter is debugged and on air.  There’s one more hurdle… I don’t have a 160 meter antenna.  Suggestions welcome.

4 thoughts on “A 160 meter homebrew superhet receiver for AM”