Sunday 10th July 2016 turned out to be my first SOTA outing for several months.  Weather was windy, overcast with intermittent showers forecast, not the worst of winter, so I headed up to the northern end of the Yarra Ranges. First up was Mt Gordon VK3/VN-027 on the way to Marysville, turning off opposite the trout farm, my second visit here (the first one was on June 8th 2015).  The summit was windy and cold. I set up the dipole which performs better than the vertical. Self-spotting and going on air at 1430, conditions were average at best, the spot bought out two stations who I could not complete QSOs with, Matt VK1MA and Geoff VK3SQ Both were weak signals and faded right out on second overs. Five QSOs followed quickly, VKs 3GGG, 5IS, 2IO, 5EE and 2PX with my signals varying between 3×5 and 5×7.

Using the old survey point as a tilt-base for the rig.

Feeling cold, I packed up and drove back to C507 Acheron Way for Mt Strickland VK3/VN-030.  Also my second visit, the previous one was on June 23rd last year. Directions I took to the summit are in this post.  Feiglins Rd and New Boundary Road were in good shape despite a lot of recent rain.   Last year I activated from the north side of the impenetrable new growth forest over the actual summit, but the wind was howling so much it was going to make the activation uncomfortable.  So I turned the car around and drove about 150m back along New Boundary Rd to the east side and settled there, a slightly more sheltered spot. I found a tree stump table and strung up the dipole again.

Dipole in the trees at Mt Strickland.

From this point on, nothing I tried to get 4 QSOs worked. First up I could not get coverage to spot. I normally carry an iPad on Telstra which gets through from most of the summits I have visited, but for some reason I left it at behind.  Mistake 😣.  It was 1600 local time  and there were several loud stations on the band as well as remnants of a contest with a number of weak stations going hard, including one very loud Californian station on 7154.  Everyone I heard was either DX or from northern VK2 or VK4.  I CQd for 40 minutes on 7090 and 7093, raising nobody.  Next I tried to call in on the end of a QSO between said VK2 and VK4s but was not heard over a weak VK5 caller.  Finally  I tried ‘break’-ing between overs of another interstate QSO (something I normally never do), still not heard.  Clearly not being heard, I packed up and limped off the mountain, tail between legs. That’s my first ever failed SOTA activation.  Disappointing, but not inconsistent with other VK3 activators’ reported experience on 40 meters recently.

When I checked email this morning I read Andrew VK3ARR’s weekend post on a 4 element 2 meter yagi he built over the weekend, which starts with:

As the HF bands drop off, I have decided it is time to up my portable capabilities on VHF…

Prescient for me, perhaps I should have spent my Sunday building a 2m beam!

Most activators run multi-band FT817s or the like have a choice of bands for when 40 meters, the SOTA workhorse band dies or doesn’t deliver.  Some may say I’ve been lucky to get 37 activations on a monoband 5 watt 40m transceiver, aided no doubt by Cycle 24, which peaked in April 2014.  It’s all downhill for HF now.

Besides buying an FT817 or KX2, which is not on the cards right at this time, there’s always the option to get a louder voice.  To that end, I have collected the bits for the W6JL amp successfully built and used by activators Glenn VK3YY and Andrew VK3JBL, so this might get bumped up the build-it-next list on the bench.

Just because I have it, here’s the GPS trace from Androzic up to Mt Strickland from Acheron Way, snapped at home (not on the summit). 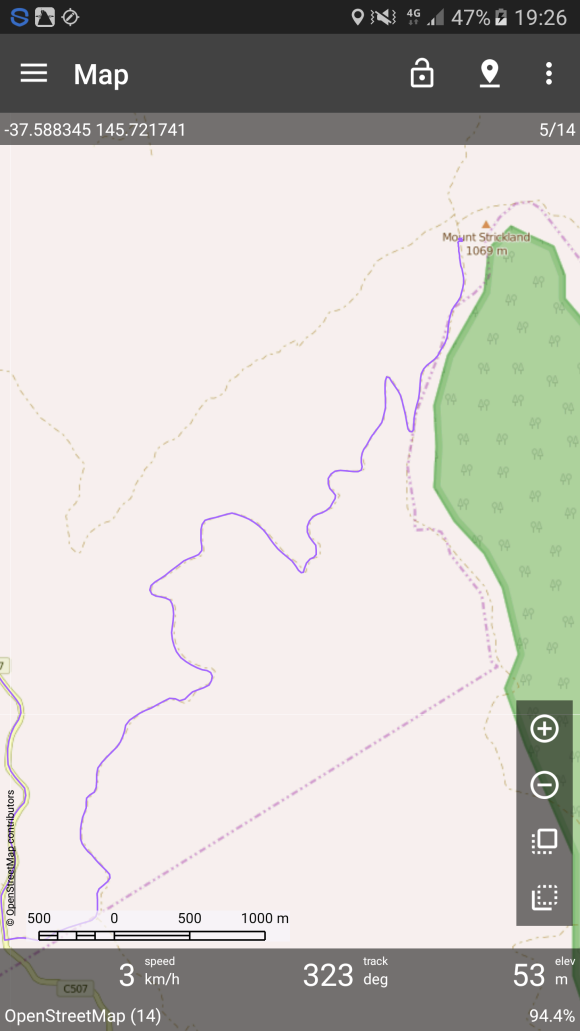