Sunday 23rd October 2016 promised to break a cold and wet spell in Victoria’s Spring weather that had deposited heavy rain, hail and snow down to 800 meters.  The night before, a bunch of keen activators had braved the weather to participate in a VK-ZL-G-Eu joint activation timed to capitalise on grey-line propagation.  Hats off to those who did go out because Melbourne’s weather was atrocious and a summit was about the last place most people would have wanted to be.  The next day, Sunday, dawned dry.  I considered going up to Lake Mountain for Federation Range but the snow cams showed a fresh coating of powdery white stuff, not enough to ski on but plenty enough to make it cold. What I really wanted was to christen my recently completed homebrew 7MHz SSB rig, codenamed ‘Summit Prowler One’.  The design and build story for this project in another post.  Mt Little Joe promised a good activation experience and a fresh mountain walk. 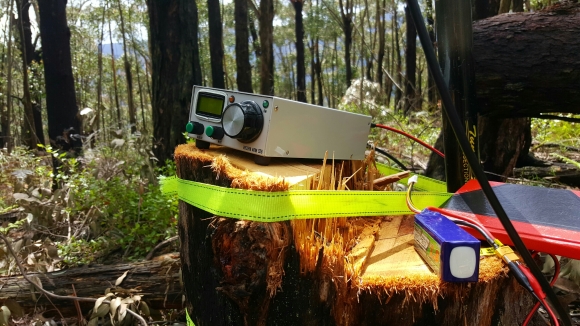 Mt Little Joe, immediately south of the town of Warburton, is a 2 point summit with a 10 point climb. Fortunately the 4WD track had been graded since my last visit, and I was able to keep to one side to avoid the worst of the slippery wet mud. The up-hill part is mercifully only about 300 meters long but it is one of the steepest sections  of 4WD track I have seen on my travels.

On the summit I set up on a tree stump table.  Initial disappointment followed… very low audio from Summit Prowler One.  I swapped over to the MST400 (my reliable, regular SOTA rig) which also sounded slightly sick.  I began to suspect my PL259s. Eventually I dropped the squid pole and, to my surprise, the solder lug on one end of the dipole was floating in the air, having lost the nut and bolt that used to fasten it against the flange of the SO239. I managed to wedge the lug firmly between the flange of the SO239 and the perspex centre plate, and taped it all up against the squid pole. Immediately the receivers sounded normal again. It amazes me how anything that is not soldered or well secured can loosen itself and fall out. 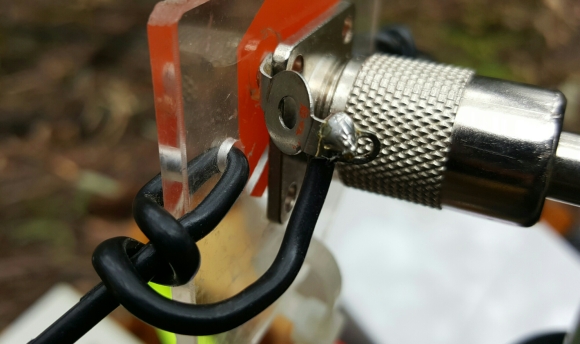 After spotting it was business as usual. 40 meters in the middle of the day provided absolutely no NVIS but the VK2s and 5s were hearing me. How gratifying to finally finish this little rig and to use it for an activation!

Summit Prowler One worked as expected.  Its VXO took me back to pre-DDS days as I fidgeted with the continuously tuning knob.  On my very first QSO with VK2IO Gerard commented that I was drifting a little.  How nostalgic. The receiver was much quieter than it sounds at home, as expected.  Perhaps bringing a gain control onto the panel might be worth it after all.  The sun was out as I walked back down to the car on Old Warburton Rd.  One species of Spring wild flower looked eyecatching, despite the wet and cool weather so far. No sign of the native ground orchids, they might appear in a few weeks. 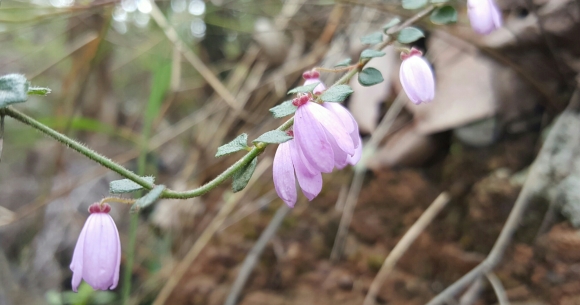 Next it was onto the Acheron Way and up to Mt Strickland. I’d been there only a few months ago and due to terrible conditions failed to get the 4 contacts requited to claim an activation.  This time band conditions were much better. I set up on the north side of the summit with great views east to the Yarra Range peaks beyond Marysville: Lake Mountain and Federation Range. 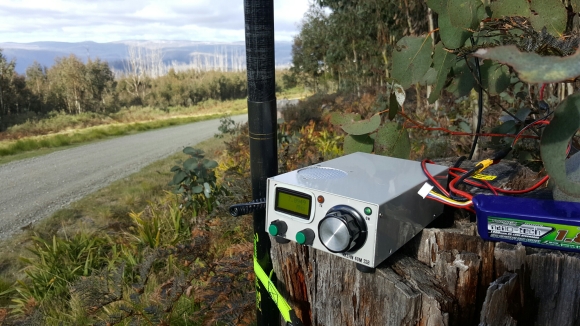 I got on air at around 5pm and band conditions and activity were good. I had overlooked the QRP Hours contest which started just as I fired up, so my 40kHz of band spread on Summit Prowler One’s VXO was full of contest stations. A healthy activation followed.

Such was the occasion of christening a new rig that I made a smartphone video after the activation, with a few annotations.

A great afternoon and early evening in the Yarra Ranges in Springtime, good propagation,  a QRP contest on 40 meters, the new radio worked flawlessly, mountain views with snow in the distance, cool but sunny and dry… what more could an activator want?