QRP By The Bay for November 2017 brought together many familiar and a few new faces and callsigns on an unseasonably hot 32 degree Celsius day. When Peter VK3YE wrapped himself up with radios and aerial parts including an ankle clasp that looked straight out of a Monty Python costume department a small crowd followed him over the dunes and down into the shallows. It was the best place to be on a hot afternoon, toes in the clear and cooling waters of Port Philip Bay.  Or should I say, VK3YE’s State-sized ground plane. The now sub surface mannacle paid off for its wearer.  Forty and 10m contacts rolled in while a few of us chatted at the edge.

A VK3YE Wadetenna session has become a regular highlight of this meet.  But the special treat for QRPers came in the form of two usable passes from the newly christened AO91, a cubesat with 435.250 FM up and 145.960 FM down.  This little shoebox was launched just  a week ago and commissioned two days earlier.  Kudos to the guys at Vanderbilt for building and successfully operationalising the latest AMSAT Oscar — what a proud history of satellite achievement.

On the first pass at about 1430, early arrivals Peter, Joe VK3YSP and Julie VK3FOWL  waved 70cm walkies and hand held 2m beams in the air as the bird flew overhead. I have to admit, it was quite impressive, the satellite’s little repeater appeared on the downlink frequency, scratchy and weak, then within seconds peaked to a fully quieting FM signal.

VKs 7, 6, 4, 3 and ZLs hurriedly exchanged reports in a scramble in which anyone could have worked anyone else on a clear uplink.  Peter did well to snag 2 or 3 of the rapidfire QSOs. I heard SOTA buddy Glenn VK3YY in amidst the mini pileup.  Then it went scratchy, and it set beneath the horizon.  Fun.  Like George Clooney on the movie Gravity, we set our wrist watch timers to 90 minutes. She’ll be back after one more earth orbit, sure enough.

An hour and a half later there must have been 5 or 6 QRPBTB VK3s monitoring 145.960. As the bird flew over the repeated voices could be heard from every part of our corner of the park. 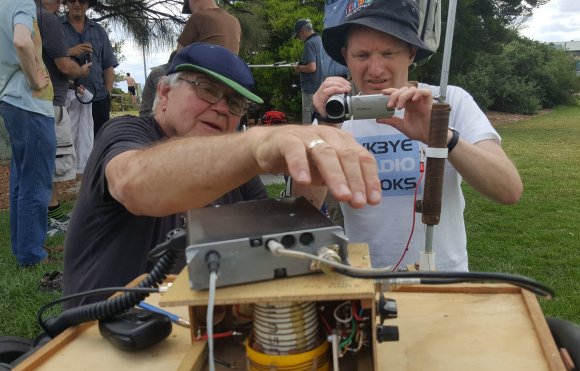 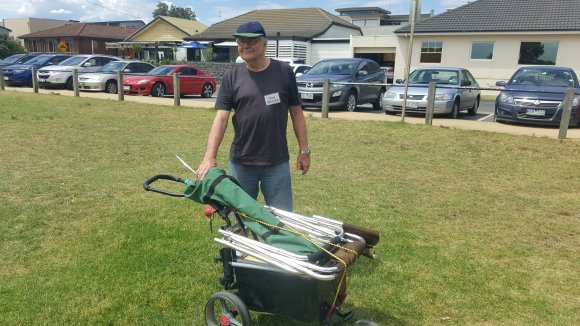 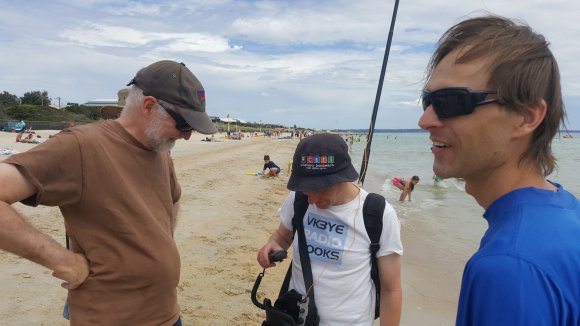 Tony VK3CAB showed us his QRP cart, a golf buggy modded as a field operating table with FT817, matcher and base loaded vertical.  Others had bought 2m and 70cm beams to catch the new bird.  A homebrew SDR appeared from a cardboard box.  QRP operating accessories were the main faire.

One more story. Towards the end of the day a mother and early teenage son walked up.  We met young Ethan, a lanky limbed and spotty faced shy looking boy. I could see he was mesmerised by the tables of gear and the ethereal sounds. Joe 3YSP showed him around and I sat with him for a few minutes, talking him through my homebrew receiver.

He recognised the Arduino… he had been playing with one and had made it switch LEDs.  I explained how the Arduino in my rig did much the same thing, just switching frequencies and relays. And like him, most of my code I found on the internet.

I showed him how a complicated radio could be made one module at a time.  I left him tuning the dial and a few moments later he called out … ‘I got one’, as he resolved a 40 meter SSB signal, like he’d caught a fish.  In a flashback I could see myself sitting in front of a long gone OMs Yaesu FTDX400 circa 1973.  I hope we planted a seed today.

There are too many callsigns to list off a roll call. It was a good turnout.  Thanks to Peter for organising and to all who attended for another enjoyable meet-up at Melbourne’s Chelsea beach, now world famous in QRP-circles, thanks to VK3YE’s Youtube channel.