The VK SOTA 160m and AM Day event provided the motivation I needed to finish off my VK3XU 160m trans-receiver. It is a separate crystal controlled  transmitter and receiver in the same box. The transmitter is a 30 watt class E transmitter with crystal oscillator, CMOS logic gate driver and BUZ90 FET PA. The receiver is a superhet with SA612 mixer and VFO, 455khz IF, MK484 AM detector, and TDA7052A audio stage. Further details in an earlier post. The modulator is an LM3876 that drives a backwards power transformer as the modulation transformer. Both transmitter and receiver have previously been tested, however, I blew the FET and had to wait what seemed like several months for an eBay replacement. In the mean time the project got shelved, until last week.

The AM/CW transmitter presented a power supply problem for portable operation. It requires a +-35v split power supply. I have a nice mains supply in a matching box for it but that wasn’t very useful on a summit. So, how do you get +-35v from batteries?

First option is to run it from +-12v from two standard activator batteries and run commensurably lower power. Not a bad option, until I read that the modulator’s LM3876 (which requires the split 35v rails) has an internal circuit that shuts it down at low voltages. Low voltages like 12 volts!

Next option I came up with is to use two cheap eBay DC-DC  converters to up convert 12 volts to 35v in each direction with respect to earth. But when I examined these modules it became clear that the earth on them cannot be floated.  So the idea, popular with some other portable operators, works for +35v but not -35v.

My third option was to use a small 12 to 240v 100 watt inverter, and lug the mains power supply with me. This is a nutty solution when you realise that you invert 12v DC to 240v AC, then transform it down to +-35v DC for the transmitter. OK, as a one-off, it’s worthy of consideration. The issue is power consumption at the battery.  If the transmitter PA draws, say, 50 watts, allowing another 30 watts for the modulator, add 20% for losses across the entire chain, total power consumption is 100 watts, continuous in AM mode. To supply this the inverter will draw a continuous 8 amps while transmitting. That would need a motorcycle battery or a high end 8-12 Ah LiFe or equivalent, neither of which I have.

The fourth option was to ditch AM, and run two batteries in series to power the receiver and CW transmitter only. Thats what I did. I used my Turnigy 1.8 Ah 4S LiFePO and my newer 4.2Ah 4S Zippy LiFe, which in series gave a healthy 28.5 volts for the PA. The receiver and other parts of the transmitter saw 13.2 volts. On the shack bench I measured 1.2 amps key down and 120 v p-p on the CRO, over 20 watts. The CW note was crisp and clean. I still have a soft spot for this kind of thing… a crystal oscillator, hex inverter squarer/driver, one switching FET and a low pass filter. So simple, so effective. 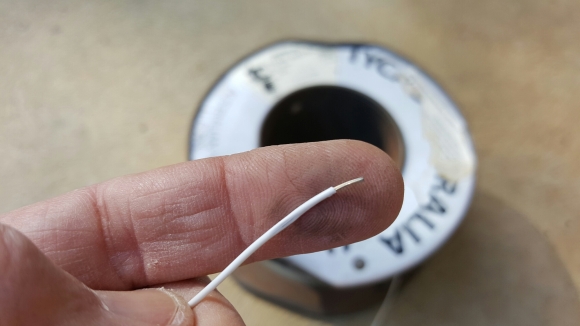 I set it up on two squid poles at home to resonate it. 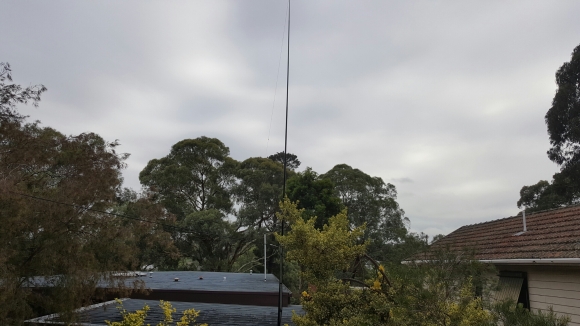 I tuned it the old fashioned way with a GDO, then the SWR meter in the IC746PRO, a pencil and paper. It took about 8 pruning trips to the roof, but I got it spot on in the end. 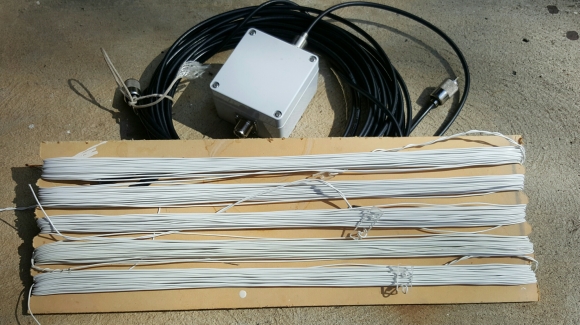 I made a travel board for the driven element and 4 radials.

I also did some casual reading on the inverted-L. The standard inverted-L antenna places the current maxima at the feedpoint at or near the ground.  This provides a feedpoint impedance conveniently close to 50 ohms, however, the losses in the earth system are higher than if the current maxima is moved up the wire by extending it to 3/8 wavelength.  Apparently, the 3/8 wave L is preferred by those in the know, because it increases overall efficiency (by reducing earth losses) but it adds an additional 1/8 wavelength of wire in the air (a mere 20 meters) and also increases the feedpoint impedance, necessitating additional tuning and matching components at the feedpoint.  Given that this was to be a temporary, portable event antenna on a summit, and not a skyhook for a 160m DXCC attempt, I decided to keep it simple.

I did, however, add a 1:1 balun at the feedpoint to reduce unwanted currents on the feedline.  I made the balun according to useful instructions from Mike N1IW, with 12 bifilar turns #20 enameled copper wire on an FT240-43. Each winding measured 177uH.  The 2.4 inch toroid would probably handle most of a kilowatt but it was on hand so I used it. I thimk 31 material would have been better for 160 but I believe the 43 material will work. 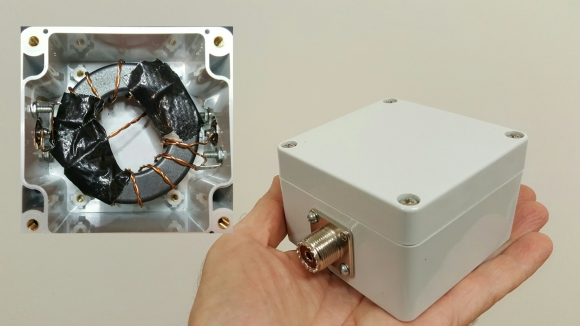 I looked for unoccupied summits within a short-ish drive from Melbourne, preferencing drive-up summits, and those close enough to maximise ground wave communications.  I chose Mt Gordon, which is about 90km north-east of the Melbourne Central Business District and 70km from the eastern suburbs.  Other Mt Gordon pros include it being a drive-up, so no need for packing and carrying, and it has cellular coverage.  Mt Gordon cons include there’s a comms tower which will generate some level of RF/digital hash, and with all that wire in the air, I have no idea how much of a problem this might be on my homebrew 160m AM receiver’s simple front end.

I arrived at the summit at 4:00PM and set up. So much wire to get in the air! When laying out the radials (40 meters long) you feel like you will never get to the end.  The wire snags on everything in sight. And getting 30 meters of wire at 8 to 10 meters high is another challenge.  Here’s a short video of the scene.

I immediately worked Tony VK3CAT/P 160 CW on Mt Mitchell and Ron VK3AFW/P on Mt Strickland.  After listening around for a while I set up for 40m SSB and worked a string of chasers in good late afternoon conditions.  As dark approached, 160 CW came alive and I worked Gerard VK2IO/P on Broken Back Range (a distance of 771km), Warren VK3BYD/P on Mt Big Ben, and John VK2YW home station. Reports were all R5, S4 to 5. Of those activators who alerted for 1.8-CW I missed David VK3IL (who didn’t get to Mt Lovick until later than planned and did not get on the key), VK1DA/P on Mt Muldoonen (not heard) and VK3ARH on Mt Beckworth (missed).

The rig and antenna performed well. I packed up in the dark and left, leaving two squid pole caps somewhere on the summit as an unintended sacrifice to the SOTA Gods. A great day of 160 and general SOTA activity, thanks to those who suggested the 160m challenge and to all who participated.

An unexpected bonus video signal report was sent to me by my brother David VK3KR, who had been tuning around and heard me on his home station in Doreen, north of Melbourne, about 53km straight line, well within ground wave. David runs SDR and a magnetic loop antenna in a location with high local noise, so all digital signal processing stops are pulled out.

A visit to Bunnings located 38mm black rubber furniture leg tips ($5), which fit the 7m MDRC squid pole perfectly, and can be pressed over the end of the Haverford 9m pole. And I even have 2 spares! 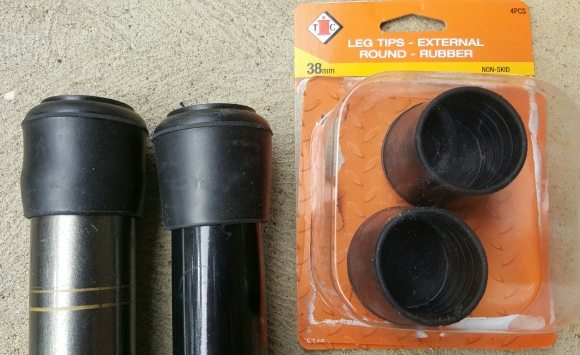 Amateur Radio, Computing and other activities of Andrew VK1DA/VK2UH

The Church of The Athletes Foot